Two for One, an Example of Twinning in Desert Tortoises 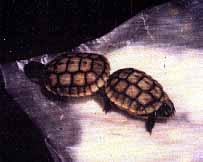 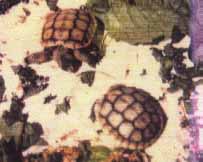 Gopherus agassizii twins, before and after separation. Photographs by Lillian Greene

Nancy Turbett, a friend, called Lillian Greene at 6:30 pm on August 26, 1992 with the news that when she checked on her desert tortoise eggs that were incubating in the incubator one had pipped at the bottom as well as at the top!

At 10:30 that evening Nancy thought the hatchling was having trouble so she decided to open the egg to help it get out. To her surprise, when she opened the egg she found that there were two hatchlings inside, connected back to back to a single yolk sac.

Nancy cleaned the hatchlings and placed the pair in a depression made in a clean plastic lunch-bag packed with cotton balls. This is a useful trick to use for any hatchlings that emerge with large yoke sacs. The plastic provides a soft, smooth and clean surface that helps to reduce the risk of the egg sac sticking and tearing before it is absorbed. This was particularly important in this case as the two fairly even sized hatchlings were pulling in opposite directions.

Twinning occurs fairly often in turtles, but usually one of the twins is either much smaller than the other or is only partly developed. If it is not already dead, the least developed twin will often die immediately after hatching. In such circumstances the umbilical cord connecting the dead embryo and the yoke sac is tied off (dental floss is a benign and easily obtained ligature) and the umbilical cord is cleanly cut through with a sterile blade. Without quick action the survival of the healthy twin is placed in jeopardy.

However, Lillian realized this was a different situation since both of Nancy's hatchlings appeared viable. Lillian called Peggy Nichols, who has hatched desert tortoise eggs every year for more than 30 years, for some expert advice. Peggy suggested that after letting the yoke sac be absorbed as much as possible, both umbilical cords should be tied off and the cords cut on the yoke sac side. Accordingly, Lillian ligated the umbilical cords with dental floss, and performed the surgery.

After separation the twins were placed in shoe boxes on slick, unprinted newspaper. The weaker of the two twins, the one which had been pulled backwards the most in the tug of war with its sibling, immediately ran to the edge of the box and tried to climb a corner!

One hatchling ate straight away, but the other showed poor coordination, seeming to have difficulty in judging exactly where the food was. It is currently being hand-fed by its owner.