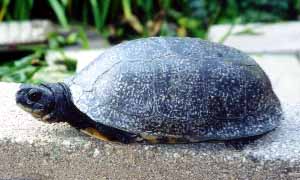 This is a medium sized semi-aquatic turtle which can grow to a carapace length of over 10.5 inches (26.7 cm). The carapace is elongate and domed. Juveniles may display distinct growth annuli, but adults usually have rather smooth carapacial scutes. Coloration is quite variable between individual turtles. The carapace is normally black or gray with scattered light yellowish or whitish flecks or dots, but in some individuals the light spots may predominate, while in others the shell is almost solid black. The plastron is yellow with a dark blotch in the outer corner of each scute. Blanding's turtles have a hinge between the pectoral and abdominal scutes that allows varying degrees of closure of the plastral lobes. In some specimens the hinge is nearly as effective as that of the box turtle (Terrapene), but, at least in Michigan, we have observed a number of specimens with practically non-functional hinges.

The notched upper jaw of Blanding's turtle is conspicuous, and contrasts with the hooked beak of the box turtle, with which this species is sometimes confused. The head and upper neck are dark, usually with some yellow spotting. The chin, throat, and lower neck are bright yellow - a good field mark when viewing basking or swimming turtles from a distance. This turtle has a long neck, which is used to good advantage when feeding, as noted below. Males have a longer, thicker tail than females, with the anal opening distal to the edge of the carapace. Adult males have a plastron that is somewhat indented in the center (concave), while the females have a flatter plastron.

For many years Emydoidea was thought to be most closely related to the chicken turtle, Deirochelys. This arrangement was based on similarities in the skull and neck vertebrae. Now most authorities place Emydoidea nearer to the European pond turtle Emys orbicularis, and the box turtle (Terrapene). The similarities to Deirochelys are attributed to convergence based on similar feeding habits. (At one time Blanding's turtle was actually placed in the genus Emys, so the rearrangement of proposed relationships can be considered a return to an earlier hypothesis.)

Blanding's turtles are found throughout the Great Lakes region, from southern Ontario through Michigan to northern Ohio and Indiana, then west through Illinois, Wisconsin, southern Minnesota, Iowa and northeastern Nebraska. There are disjunct populations in New England, southern New York State, and Nova Scotia. These turtles prefer to inhabit slow-moving or still, shallow waters with muddy bottom substrate and ample submerged and/or emergent vegetation. In Michigan, they are characteristic turtles of lake-edge marshes, but are also found in weedy ponds and grassy river backwaters. This species, despite being a mostly aquatic turtle, does have an unfortunate tendency to move terrestrially, particularly in spring, and large numbers are killed on roads each year.

Most mating activity in Emydoidea blandingii occurs in April and May, but copulation has been reported throughout the summer and into early fall. Mating usually takes place in water. The male appears to indulge in little courtship behavior besides "hot pursuit". Once mounted, the male clasps the edge of the female's carapace with his claws and attempts to restrain her by pressing his chin upon her withdrawn head. Most egg laying occurs in June, with females often wandering considerable distances away from water to nest (and, as noted above, often ending up as road fatalities). The ellipsoidal, flexible-shelled eggs number from 6 to 21. The incubation period varies from 45 to 80 days, depending on temperature and moisture within the nest. Although some overwintering by hatchlings in the nest has been reported, most emerge in late August or early September.

Considering the long distance that often must be traversed by the young to reach suitable aquatic habitat, one might conclude that Emydoidea neonates are either extremely resistant to desiccation and temperature fluctuations, or extremely unlikely to survive their first weeks out of the nest. Possibly the latter presumption is closer to the truth, as young Blanding's turtles are rarely encountered in the wild. As is true for many other turtle species, mortality of eggs and young is reportedly very high in Emydoidea, and the population is probably maintained by the potentially long reproductive lives of those turtles fortunate enough to reach maturity. Blanding's turtles are known to reach at least 60 years of age.

Blanding's turtles will, at times, eat out of water, but the vast majority of feeding is done while submerged. This species is largely carnivorous. Published accounts of stomach contents do include vegetable matter, although some of this may be explained by accidental ingestion. It seems likely that these turtles do occasionally eat aquatic plants. Crustaceans such as crayfish are highly favored, along with insects and other invertebrates, but Blanding's turtles do not hesitate to feed on vertebrates, such as fish and tadpoles, when available. They will also take carrion, if it is not overly decayed.

Food is captured by rapid thrusts of the long neck. The "capture stroke" is nearly as rapid as that of the snapping turtle (Chelydra), but unlike the snapper, Blanding's turtles rarely use biting as a mode of defense. In fact, this is among the most gentle of creatures, and it is difficult to induce even newly captured specimens to bite.

The future of the Blanding's turtle as an element of our herpetofauna is tied largely to the fate of its wetland habitats. Wherever human interests have reduced or degraded these habitats, the numbers of turtles have also been reduced. As previously noted, the automobile is certainly a major drain on the population. The species has been given legal protection in some states, particularly on the edge of its range, or where it exists only in isolated relict populations. In Michigan, where they appear to be holding their own in the remaining habitat, a daily bag limit (2) and possession limit (6) is in effect. Fortunately, Emydoidea has not been as heavily exploited for the pet trade or human food as certain other species, and we can hope that there will be no increase in demand. While these turtles will adapt to captive conditions, they grow too large and are too active to be recommended as aquarium pets. It is not difficult, and more satisfying, to observe the turtles in their natural habitat. Here in their Great Lakes stronghold, Blanding's turtles will continue to exist in viable numbers if they (and the wetlands they depend on) are simply left alone.

Dr. Harding is a Museum Specialist at the Michigan State University Museum. He is well known for his extensive and fascinating field studies of Michigan turtles in the wild.