by Diane Levine and David Schafer 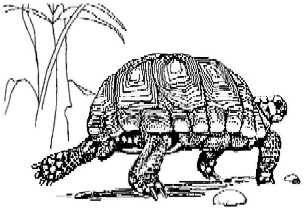 Found in tropical South America – the Guianas, Venezuela, Brazil, Ecuador and Paraguayand on some Caribbean islands – the red-footed tortoise (Geochelone carbonaria) has a dark carapace with lighter patches of yellow in the centers of the scutes and around the outside edges of the shell. Although there is much variation, the legs and head are often colored with patches of red, orange or yellow. Many individuals have a distinctive constriction in the sides of their shells, giving the appearance of a waistline or an hourglass shape when viewed from above.

Adult males, at an average of 13.25 inches (30.4 cm) long, are somewhat larger than the females, which average 11.25 inches (28.9 cm) in length. They are sexually mature at a smaller size than this, and tortoises owned by one of us (D.S.) have successfully bred at about 8" in length. Males have a concave plastron, just as our own desert tortoises do, and have lower, flatter, and a more pronounced hourglass shape to their carapaces than do females. Males also have longer, thicker tails than the females do. Pritchard reports that the largest red-footed tortoise on record is 17.75" long. Its shell is in the American Museum of Natural History. Although no sub-species have been described red-foots occur over a huge geographic area and there is considerable variation in size and color. Recently, importers and animal dealers have been offering so called "dwarf" red-footed tortoises for sale. These are brightly patterned with scarlet markings, reach a length of 6" to 8" or so, but are otherwise indistinguishable.

The handsome red-foot shares some of its range in the wild with the yellow-footed tortoise (Geochelone denticulata). While both species are found in tropical forests, in Surinam, where there is forest and open grasslands (created by man as a result of "slash and burn" agricultural methods), Pritchard mentions that only the red-footed tortoises appear to have ventured out of the forest into the grasslands. The yellow-footed tortoises have stayed exclusively in the forest. David keeps both species at his home here in southern California. He feels that the red-foots are noisier and hardier, but less aggressive than the larger yellow-foots.

According to both Pritchard and to Ernst & Barbour the mating ritual of red-footed tortoises involves some very distinctive head movements on the part of the male. He begins by standing side-by-side with another tortoise and moving his head suddenly to one side, then returning it to the middle, in a series of sideways jerking motions. (Not like the front facing, head bobbing desert tortoise that many of us are familiar with.) If the second tortoise is a male, he will respond with similar head movements, and some characteristic pushing and shoving may then ensue. If, however, the second tortoise is a female, she will not move her head in response. The male will move around to sniff at her tail, to confirm what he already suspects, before mating begins. Experiments have shown that in order for mating to proceed, not only do the movements of the head have to be precise, but also the coloration of the head has to be correct. An artificial head not colored to match the species' pattern, did not elicit the appropriate response from either male or female.

Perhaps the most usual thing about their breeding behavior is that the male makes a clucking sound during courtship and mating. The clucks sound amazingly like a hen; however, they rise and fall in pitch according to a set pattern.

In the wild, the red-footed tortoise lays clutches of 5 to 15 eggs between July and September. They are generally buried in a nest in the ground in typical tortoise style. However, Pritchard reports that locals in Panama have observed eggs laid in leaf-litter on the forest floor. Eggs are oblong (about 2" x 1.5") and have brittle shells. The hatchlings are round and flat, and are about 1.5" in diameter. They have none of the toothlike projections on the edges of their shells found in the yellow-footed tortoises.

David's captive red-footed tortoises show intense mating activity throughout the winter months. Two clutches of 4 eggs have been laid in early summer in two consecutive years. Young from one of these clutches hatched after 120 days incubation at a temperature of about 80°F.

The forest habitat provides the red-foot with an abundance of fallen fruits such as wild plum. It also eats wild mushrooms, vines, grasses, succulents and carrion, and is attracted to yellow and red flowers. Twice a week David feeds his red-foots mixed vegetables, green leafy vegetables, and fruits and flowers supplemented with Osteoform powder, and once a week he offers them Zu-Preem. His hatchlings eat a similar diet to the adults. Inhabitants of humid forests, red-foots do drink lots of water and David's have learned to drink from an automatic watering bowl designed for dogs! Each tortoise gets an enforced soaking in warm water at least once every week.

During the winter David houses his red-footed tortoises indoors in a large wooden cage that is kept in a room where the temperature is maintained at 85°F. The cage has colored lights (60 watt) mounted in each corner to provide basking spots, darker covered areas for the tortoises to retreat into, and during the daytime is lit with full spectrum lighting from a bank of Vitalite fluorescent bulbs mounted over the cage. The cage floor is lined with newspaper which often needs replacing several times a day. Hatchlings and young tortoises are housed separate from the adults in 40 gallon aquariums on a substrate of rabbit pellets, but are otherwise treated in the same manner as the adults.