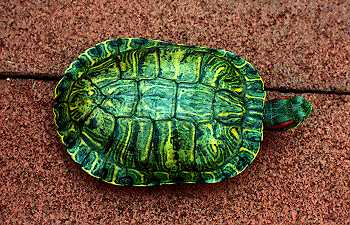 Red-eared sliders (Trachemys scripta elegans) are probably the most commonly kept reptile in the world. Their home range lies in the Mississippi Valley drainage, with most of the population occurring in the US from eastern New Mexico, Texas, Louisiana, Mississippi, Alabama, and through Oklahoma, Arkansas, Kansas, Kentucky, Tennessee, eastern Kansas, and Missouri north to Indiana and Illinois. They also occur naturally in isolated pockets in other states such as Ohio, and are common in regions of northeast Mexico adjacent to Texas. However, "feral" populations, derived by deliberate introduction or from dumped or escaped pets, have become established in suitable habitat all over the world including other parts of the US.

Introduced red-eared sliders can be seen in ponds in several urban Los Angeles parks, and some of these populations breed. In November 1991, I was given a recently hatched red-ear (it still had its egg tooth and an incompletely absorbed yolk sac) that had been found by Lake Hollywood. Hatchlings are often spotted at the Los Angeles Arboretum, where a large concentration of sliders exists. While this evidence indicates that red-eared sliders can survive and breed in urban Los Angeles it is not clear if enough of the hatchlings survive to make these populations self-sustaining. Fresh water ponds are rare in southern California, and act as magnets for predators such as raccoons that, if given the chance, will happily dine on turtles or their eggs. However, even if hatchling survival is poor, the population is continually being topped up with newly abandoned pets that have outgrown either their tanks or the interest of their owners. Survival for dumped pets is marginal at best and their presence will impact on native flora and fauna. I urge all readers to do what they can to discourage this disgusting habit. Turtles (even red-eared sliders) are not trash! Given the correct housing conditions and a little foresight, red-ears thrive in captivity and can make amusing, simple to keep, and rewarding pets.

Red-eared sliders are webbed-footed water turtles that typically have a red streak on each side of the head, and sometimes a red spot on top of the head. The red streak is sometimes broken up into two or three spots, and varies in shade from orange to deep red. Some red-eared sliders don't have the red streak! The typical hatchling red-ear has an attractive green carapace and skin. The carapace is finely patterned with yellow-green to dark green markings. As the turtles age, the general shell color changes. In young adults the basic green may be replaced by yellow, giving way eventually to a more somber drab olive. The shell is patterned with dark lines, streaks or smudges, sometimes with patches of white, yellow or even red. Identification problems can arise because the red-ear intergrades with turtles such as the yellow-bellied slider in the wild, and they often interbreed with other sliders in captivity. Red-eared sliders have the distinction of probably being the first turtle species to have color variants (such as albino and the pretty pastel phase) developed by breeders.

In old specimens the carapace becomes more uniform in color, as the contrast between the pattern and the shell color diminishes. Brown through charcoal gray to black (melanistic) turtles are also encountered, and often these are elderly males. I have a large melanistic male (carapace length 21 cm, 8") in my collection. If you closely examine the side of his head the distinctive ear stripe can be made out, although the red is replaced by gray.

In addition to the melanistic male, I have two other still growing young and brightly colored males (15.5 cm and 18 cm, 6" and 7") and a mature female (26 cm, 10"). Apart from their smaller size, the males are easily distinguished from the female by their spectacularly long front claw nails and their much longer and thicker tails. The two smaller males were turned over to me with shell problems, both having shell rot and sizable patches of exposed bone on their carapaces. Now, three years later, extensive re-pigmentation has occurred and the pattern has regenerated over the bony areas.

My adults are housed outside in an enclosed pond. They spend a considerable amount of time out of the water basking, but usually remain close enough to be able to dive into the pond at a moments notice if approached. Being long term captives, however, once back in the pond they will stretch out their heads above the water and follow your movements in anticipation of being fed.

I feed them from mid-March through November. I use Purina Trout Chow as the staple for the adults, which is eagerly taken. They are partial to vegetables and get regular offerings of water hyacinth, which I grow in a separate pond, and other water plants. They also graze on plants growing around their pond, including Bermuda grass. For variety, I periodically offer cat kibble, fish, snails, fruit and leafy vegetables. I give hatchlings a similar diet, although they rarely take vegetable matter. Hatchlings are particularly fond of Tetra Reptomin, and this is a useful starter food, but I have raised several batches to 4" in one year on Trout Chow alone.

Los Angeles winters are mild, but still cool enough for the sliders to brumate. Between December and March I stop cleaning the pond, and the sliders overwinter in the mud, debris and accumulated leaves on the bottom. During warm spells in January and February they will occasionally surface to bask, and the males will even court the female. Native annual grasses grow up by the pond every spring, that get long enough for the blades to reach the water. I can tell when it's time to resume feeding again because suddenly one day in mid-March I will come home from work and find the grass around the pond has been grazed to the ground!

Red-ears readily breed in captivity, and they have a neat and elegant courtship display that makes fascinating viewing. A male will spend hours trying to maneuver the female into a favorable position so that he can line up face to face with her. He stretches out his fore-legs in front of his head and vibrates his long fingernails in her face. This is followed by more boisterous activity during which the male may bite the female on the neck, and, ultimately, by mating itself.

In summer 1990, my sister visited for a few weeks. After seeing a clutch of eggs incubating (laid July 7), she was curious to see what a turtle nest looked like. The day (August 13) she went to Disneyland I saw the female nest and lay eggs. The next day we carefully opened up the nest with a spoon and a paint brush so that my sister could see the beautifully constructed nest. The nests are built with a 2"-3" wide opening that opens out into a 4"-5" wide chamber. When the female finishes laying, she scrapes mud and debris over the hole forming a plug leaving an air pocket above the eggs. Having opened the nest, we brought the eggs inside to incubate. Two weeks later the July 7 clutch and the clutch retrieved August 13 both hatched on the same day! Evidently, the second clutch I had dug up was not the clutch laid August 13, but one that had been laid close to it at an earlier time. Sure enough, on October 14, just two days after the hose was accidentally left running and flooded the pond area, a clutch of 14 hatchlings emerged from the same area.

To incubate slider eggs indoors I half bury them in moist vermiculite in plastic shoe boxes with loose-fitting lids. I monitor the water content by weighing the boxes during incubation and adding water to keep the same weight or judging it visually from the amount of condensation on the box top. At about 26°C (80°F) they hatch in 50-62 days.

Eggs left undisturbed in the nest will usually incubate for longer. Because rain is so rare here in the Los Angeles area during the summer and fall, and the ground where the female usually nests becomes hard baked, emergence of hatchlings is dependent on how much irrigation water the pond area receives. Three clutches have emerged 2 days after the pond area was given a thorough soaking. The clutch that emerged on October 14, 1991 was probably the one laid on August 13 (a 95 day period). These hatchlings lacked egg teeth and traces of yolk sac, suggesting that they had hatched at some earlier time. One clutch of 13 hatchlings was dug up by accident on February 18, 1990, during a cold spell. I presume they had been laid in the previous summer or fall and were over wintering in the nest, again, because of the lack of egg teeth or traces of yolk sac. As mentioned above, I have lost at least two slider clutches to predators. The first predator did a very neat job of opening up the nest plug, carefully removing the eggs, slitting them length ways, eating the contents and then leaving the eggs carefully lined up side by side. Because of the neatness of the job, I suspect that the predator was probably a rat. The second nest was broken wide open, and may have been done by one of the other turtles.

I house hatchlings indoors in plastic tubs lit with wide spectrum Sylvania 50 lights, and provided with rocks for basking sites. The water is kept at least one turtle length deep, which allows them to right themselves should the turn over, and is changed every day. I do not heat the water but the room where they are housed is kept at a minimum of 25°C (78°F) during the day and 20°C (70°F) at night. Growth is temperature dependent, and hatchlings kept warmer than this will grow faster. At 3" to 4" I put them outside in a "nursery" pond. The slider on the front page is 2 years old.

One final note--if any of you are interested in keeping red-eared sliders please contact one of the adoption officers. Adults and juveniles in need of homes are turned in to the Club on a regular basis, and hatchlings are usually available during the summer and fall.