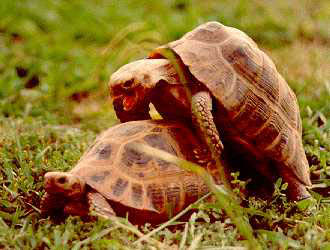 The elongated or yellow-headed tortoise (Indotestudo elongata) occurs in tropical southeast Asia, being found in parts of northeast India, Bangladesh, Burma, Cambodia, Laos, Vietnam, Thailand and Malaysia. Elongated tortoises inhabit humid upland forest areas, but they have been observed basking on open ground in India during extreme heat. As the common names suggest, these up to 1 foot-long tortoises have elongated somewhat narrow carapaces and yellow heads. The carapaces are a yellowish-brown color, often with black "smudges" on each scute. Males have a plastral concavity and much longer tails than the females. The only similar tortoise, the Travencore tortoise, I. forsteni, lacks the nuchal scute found in I. elongata and is rarely seen in the United States.

My long-lasting interest in the elongated tortoise began back in 1977 when I bought my original pair from a local pet store over 15 years ago. During the last nine years they have produced 45 offspring. In the last two years, young from the first clutch of eggs from the original pair have themselves produced offspring.

As with all my tortoises, the adults and sub-adults are housed outdoors all year round, where they have free range of a large yard. Houses, heated using pig-blankets or electrical bricks, are available as warm retreats. The southern Californian climate is mild enough for the elongata to venture outside almost every day for at least a short time. They tend to return to the heated houses at night under their own steam, and are locked in the houses at night. Early shut-in times, necessitated if I am away for the evening, often conflict with the wishes of the elongated tortoises, which prefer to be out until late at night. However, confining them is necessary to keep them safe from nocturnal prowlers (raccoons live in the area) and to ensure that they keep warm at night. If they are still feeding at this time they are allowed to finish. If a female is laying or preparing to lay it may be midnight before she can be locked up. Although the houses are unlocked early in the morning, the elongated tortoises often will not come out until late in the day.

Each day the elongated tortoises are offered a mixture consisting of Italian parsley, parsley, mustard greens, dandelion, spinach, kale, turnip greens and collard greens. They are also offered Pure Pride 100 pellets (a horse chow made by Purina), which are eagerly taken, mixed with guinea-pig pellets. Prior to using the horse chow, I used to offer cat chow, moistened by soaking in water, as a protein source. Once or twice a week they are also fed shredded carrots, zucchini squash, yams, pumpkin and mixed vegetables (which they adore), and fruit such as banana peelings and cantaloupe. The amount of fruit is limited because it attracts flies. The elongateds do some grazing, usually on leafy or flowering plants such as hibiscus and very rarely on grass. They are very fond of snails which they eat whole. Cuttlebones and eggshells are provided as a supplemental calcium source.

Small rocks, usually smooth river gravel, are present in their droppings so regularly that I consider this a normal occurrence. Almost all of my elongateds seem to eat them. Bathing water is available at all times, but although they often take long drinks of water, they do not wallow very often. They seem to tolerate the dry air very well, and their skin certainly doesn't appear to get as dry as that of the red-footed tortoises.

Breeding activity occurs throughout the summer and fall. At this time the nose and eye regions of both males and females acquire a reddish-pink hue. Late in the day horrendous ramming sounds echo repetitively through the yard. The male may follow the female around the yard for several hours, ramming her violently every few minutes when the female stops moving. The ramming is so loud it seems surprising that their shells don't break. During the actual mating act the male vocalizes loudly.

Other than in courtship, the males do not seem to be overly aggressive. There was little or no fighting when, for a while, I had three males in the yard (the original male and two of his grown-up offspring). Interestingly, in contrast to other similar sized species such as red-footed tortoises which seem attracted to anything that walks, I have never seen the male bother females of other species.

Clutches of 5-9 eggs (as few as 1-2 in smaller females) are usually laid at night in November, December, or January. The eggs are deposited into laboriously dug 4 inch deep nests. Females raised from hatching first began laying fertile eggs at 7 years (7-8 inches). One 9 year old female (12 inches long) is now laying 8-9 eggs in a clutch. Females tend to reuse the same nesting site, and may nest 1 to 3 times each year. Two of the three adult females lay their eggs in the same area. I recover the eggs, mark the tops and incubate them artificially. I have used a variety of incubation methods over the years including placing the eggs in moist vermiculite or sphagnum moss in plastic containers placed inside a terrarium kept at constant temperature, and using bird egg incubators. At a temperature of 80-85°F, the eggs have taken 98-134 days to hatch. Eggs from a given clutch have tended to either all hatch or all spoil. On occasion this variation may have been due to an unstable incubation temperature. I am also concerned that somehow normal egg development may be disrupted when the red-footed tortoises that share the yard try to mate with or bother the elongateds.

Hatchlings are housed in Vitalite-lit terrariums on a substrate of Astroturf, with half the tank heated with an undertank heating pad. They are given a diet similar to that of the adults, with more frequent feedings of cat chow sprinkled onto their greens. They cannot be sexed reliably until they are about 6 inches long (at 3 years or so). I originally thought that the first clutch I ever hatched included 1 male and 8 females, but several years later it turned out to be 3 males and 6 females. Hatchlings go outdoors in their second year when they are 2-3 inches long.

One year, one clutch included a huge egg about twice the usual size. The egg contained twins, one twice the size of the other, sharing a common yolk sac. Regretfully, I did not try to separate them until late in the day, hoping that things might take their own course. Too nervous to separate them myself, Martha Young performed the surgery at a Chevron gas station at 10 o'clock that night! The umbilical cords were ligated and then cut with a sterile razor blade. Although the little one started out strong, he soon died. Perhaps if the separation time had been shorter and he had had a few extra hours of yolk sac on his own he may have survived. His larger twin has remained above average size and has thrived.

Betsy McCormick lives in Fullerton, California, and has been a member of CTTC since 1968.