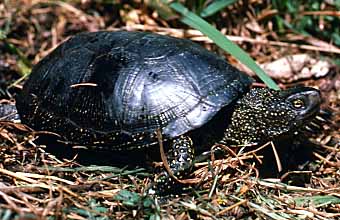 The European pond turtle, Emys orbicularis, is native to Spain, France, northern Italy, southern Germany, Poland, Turkey, Iran, Russia, Morocco and Algeria. Although its appearance varies over its large range, E. orbicularis is often easily identifiable because of the pretty, bright yellow or gold speckling present on the dark carapace and skin of many of the juveniles and adults.

Peter Pritchard (in his Encyclopedia of Turtles) compares the European pond turtle to the Blanding's turtle of North America. At one time, both were classified in the same genus since both have a slightly hinged plastron and a speckled carapacial pattern. However, because of internal skeletal differences in the neck, skull, and ribs scientists now separate them into different genera.

An evidently adaptable species, turtle hobbyists here in the United States have successfully kept and bred European pond turtles under rather diverse circumstances. For the last 7 years, 6 adults (3.3) have made their home in Betty Caldarelli's collection in Norwalk, California, where they mingle with the yard's other occupants, such as western pond turtles, red-eared sliders, cooters, and wood turtles. They are free to roam in her backyard, with its flower beds, lawn and two cement ponds. The large 20 foot by 5 foot crescent-shaped pond was there when Betty moved in, but was remodeled with the addition of a waterfall and external filter. It is raised and surrounded by a flower bed. The smaller 6 foot by 4 foot pond is surrounded by a 2 foot brick wall. Despite the walls, the turtles manage to move between the two ponds and to get in and out of the rest of the yard.

On the east coast, in Queens, New York City, Suzanne Dohm, president of the New York Turtle and Tortoise Society has a pair of European pond turtles who live, along with several box turtles, in a table-height, Plexiglas indoor environment that was built to fit in a corner of her apartment. The environment forms a right-angle, about 3 feet wide and extending about 5 feet in either direction from the corner of the room. It includes a 10 gallon, 2 level pond, a basking area, and a digging/hiding area. The pond is by a window so the turtles can bask on the window ledge year-round. The environment has built-in garden hose plumbing. The hoses go around the room, through the wall and into the bathroom where they are stored in a closet until Suzanne needs to move them to the bathtub to drain and refill the pond. Since she has recently moved to a house, the turtles now have a balcony "window box" for basking on warm spring days, and this coming summer they will have an outdoor pond in the backyard.

European pond turtles are carnivorous, and the staple of their diet at the Caldarelli's home is Purina Trout Chow. Betty supplements this occasionally with super mealworms and fortified beef patties (a "meat-loaf" made by mixing 1 pound of ground extra-lean stewing beef, 1 tablespoon calcium carbonate powder, 2 teaspoons Super-Preen vitamin powder, 1 tablespoon alfalfa meal. The mix is formed into hamburger patties that are foil-wrapped and frozen until needed). Because of the danger of transmitting parasites, Betty never offers fish to her pond turtles.

Suzanne Dohm keeps an earthworm ranch going year-round to feed her turtles, but she also feeds Turtle Brittle (a food developed by Zoo Atlanta and available through Nasco by mail-order). Compared to trout chow, it has less of a fishy smell (an important consideration when your turtles are kept indoors), it doesn't crumble in the water as easily, and it doesn't leave an oily film on the water. Although European pond turtles are generally carnivorous, Suzanne found that after the female had eaten her fill of earthworms and Turtle Brittle, she would steal fruits and vegetables from the box turtles. Because of this, Suzanne offers the female fruits and vegetables regularly. The male however, remains a strict carnivore.

Besides the difference in their eating habits, Suzanne has noticed a difference in her pond turtles' habitat preferences. The male spends most of his time in the water, but the female gets out and often sleeps dug-in with the box turtles. In the winter, she may enter the water only once a week or so to drink and take a short swim.

In the wild, European pond turtles may lay ten eggs per clutch, but both Betty and Suzanne report an average of 5 eggs per clutch from their females. However, while wild pond turtles may not lay eggs at all in unseasonably cool European summers, in the warm climate of southern California and the indoor east coast environment their captives have consistently produced as many as 3 clutches per female each year.

Despite a choice of nesting sites being available to them, Betty has noticed that her European pond turtles prefer to lay their eggs in the roots of a small plant. When her female shows signs of being ready to nest, Suzanne prepares a nesting tank for her--a five gallon aquarium filled with packed, moist potting soil. "I'm always palpating her to feel the eggs. And then when they get very close, down to the tail, I know its getting close to the time. She also goes off her feed and... literally, starts to climb the walls." Suzanne puts her female into the nesting tank at night and leaves her there, undisturbed by noise or light until morning. Usually by the second night, she has nested.

About half of Betty's thirty hatchlings have hatched from eggs that incubated successfully outside in the nest dug by the female turtle. The rest have hatched from eggs that Betty incubated inside in small plastic butter tubs. To do this, she takes two wet paper towels, thoroughly wrung out. She lines the bottom of the tub with one, places the eggs on it, and then covers them with the other towel. She replaces the lid, without making air holes, and leaves them to incubate. They incubate either at room temperature in her hall closet or in her "hot room", that she keeps heated to 90°F.

Suzanne moves the eggs from the nesting tank to an incubation tank after carefully penciling an "X" on the top side of each egg. She has been incubating her eggs at room temperature, however, this has produced all male offspring. So this year, she is planning to send the eggs to the Turtleback Zoo (in New Jersey) to be incubated under controlled temperatures to see if she can get a more balanced sex ratio. 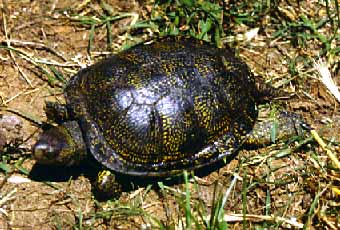 The Caldarelli hatchlings are raised on a diet of Wardley's Reptile Ten (similar to Tetra Reptomin but less expensive), cut-up night-crawlers and mealworms, and bits of fortified hamburger meat. The Dohm hatchlings reflect their parent's divergent tastes in that some will eat fruits and vegetables, while others are not interested. (The hatchlings also differ among themselves in the amount of time they choose to spend in the water.)

One curious thing that Betty has noticed about her European pond turtles is that males will often ride mounted on the back of a large red-eared slider as it swims around the pond. She speculates that the mounting of a member of another species is a misdirected part of the mating ritual, but it looks almost as if they are saying "Well, I'm too lazy to swim. I'll just hitch a ride with this guy!"

One curious thing that Suzanne has noticed is that her male European pond turtle seems to be monogamous! She had the male first. When she acquired the female and put them together it was "love at first sight". Since then other NYTTS members have brought their females to visit the male. The male seems inquisitive but shows no interest in mating. Given the male's lack of interest in other females, Suzanne speculates that her female is a "10" in the European pond turtle world!