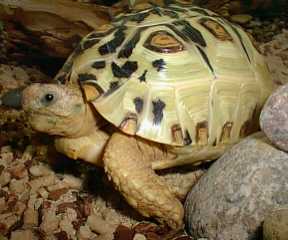 In December 1987 I joined the Southwestern Herpetologists Society and a friend showed me a couple of African leopard tortoises (Geochelone pardalis). I asked him to pick up a pair for me. When I opened the box he had brought to the January meeting for me I thought I had never seen anything as beautiful as the two tortoises inside. The male was about 5 pounds and the female about 15 (I wish I had weighed and measured them when I first got them!).

It was warm for a January, in the 80°s during the day and in the low 60°s at night. I put the leopard tortoises outside in the front yard during the day and moved them in at night to a box filled with rabbit pellets. Over the next few days I watched them chow down on the grass and weeds in the yard, and the male pace for hours along the fence. I realized I needed to get a lot more information about this pair of fascinating creatures that I now had.

I joined the Valley Chapter of CTTC and learned more about them--that they ate mainly vegetables and fruit. I tried offering them watermelon, cantaloupe, strawberries, and apples along with dark green leafy vegetables. They would take a few bites, then the female would go to a corner of the yard, pull in and not move, while the male would continue his fence pacing.

What I hadn't noticed was that as the warm spell ended, the temperature was now only rising to 70°F during the warmest part of the day and it was cooling faster each afternoon. Because of the lower temperatures the tortoises were digesting their food more slowly and so did not eat as much. I brought them inside and kept them in their box. At a temperature of about 80°F or so they ate a little more but nowhere near as much as I would like to have seen. Later I would discover, through trial and error, that mine seem to eat best when warm and outside!

I sure have learned a lot since that first winter, and have added another male and two females to my collection. These leopard tortoises come from tropical Africa and do not hibernate. They are active throughout the year if kept warm and will eat anytime if the temperature is hot enough.

In hot weather they become active early in the morning. They feed, and then find a bush to hide under until late afternoon when they come out once again for a brief feeding session before returning to their preferred nighttime spot. Each of my tortoises has a daytime resting place which is different from where it retires to at night. Knowing where they like to retire to makes it easier for me to find them, because in tall weeds or shrubs leopard tortoises are unbelievably hard to spot as the sun goes down or after dark.

I bring the tortoises inside anytime the temperature drops below 60°F and leave them inside on cool, cloudy or rainy days. I have not had any problems with serious illness or disease.

The original 5-pound male grew a whopping 3 pounds in three years, and the 15-pound female now weighs 30 pounds. Because he was and is so much smaller than the female, I had dashed all hopes of getting eggs from the pair even though the female dug a hole in December 1990 but laid no eggs that I could find.

On Friday Oct 4, 1991 when I went to bring the tortoises inside for the evening I found the female but not in her usual spot. When I bent down to look at her I saw that she was laying eggs! I hurried off to borrow a camcorder. Never having used one before, after much trial and error I managed to record only the last 5 minutes of her filling in the nest. As with many other turtles, female leopard tortoises go into an almost trance like state when laying their eggs. Even the noise from dropping the flood lights I tried to set up to provide light and heat did not seem to affect her in the least. I waited, for what seemed like hours, for her to finish tamping down the soil with the tops of her thick stumpy back feet. When she was done she walked away and I carefully excavated the nest to reveal 23 white golf ball-sized eggs in the back of an L-shaped cavity. On egg was broken. I transferred the 22 intact eggs, after marking the tops with a #2 pencil, into a sweater box half filled with clean fine aquarium sand. I placed each one in a depression in the sand with the pencil mark up to try to keep the eggs in the same position that they were laid in. I placed the sweater box into a Hovobator chick egg incubator, put a small jar of water in one corner, and set the temperature at 83°F and waited. The books I read suggested it would take 120 to 150 days for the eggs to hatch.

Later that month, on October 28, while I was letting my dogs out into the front yard I saw what looked like a very pretty rock between the gate and the board. When I lifted it up to my surprise it was a newly hatched leopard tortoise! It had been raining for several days and it was in the mid 60°s. It is absolutely amazing that a leopard tortoise could have hatched "naturally" here in the Valley. I named him Lucky! Although I searched the yard several times and watched for babies for weeks I never found any others.

As it was getting colder now I put the adult tortoises out in my greenhouse during the day because the temperature reaches 90°F or better even on cool cloudy days. On November 13 I went in to the greenhouse and the female was sitting over a wet spot. I thought it may mean more eggs. I tried digging up the area. I had to use a shovel to get through the top 2-3 inches of compacted soil, then hit soft dirt. I continued to dig with a spoon and uncovered 15 more golf balls, 40 days after finding the first clutch.

Not expecting any of the eggs to hatch until February or March I literally fell over on Christmas Eve when I opened the incubator to show the eggs to guests. There, half out of the shell, was a hatchling! Within 7 days another 11 hatchlings emerged. These 12 eggs hatched in 89-95 days.

Each week, I spend many hours of hard work and a good amount of money to maintain my 5 leopard tortoises. Everyday I offer them a mixture of chopped greens that includes most of these: collards, parsley, endive, escarole, kale, cabbage, mustard greens, corn on the cob (raw). I add grated carrots, zucchini, yams or sweet potatoes. I offer some fruit depending on the season–melon, cantaloupe, pears, strawberries, apples, kiwi, tomato. A pile of alfalfa hay is usually available. A shallow dish of water is available at all times. I soak them once a week in a large plastic pan, to help remove any dried fruit and waste from their plastrons.

I am planning to re-turf my yard with St. Augustine's grass for permanent forage and to build a shallow pond so that they can soak and wallow more frequently.

To sum things up, leopard tortoises are not for everyone but, if you don't mind chopping food and lugging tortoises out in the morning and in at night and have a warm place for them to be in winter, I highly recommend them as long term pets.