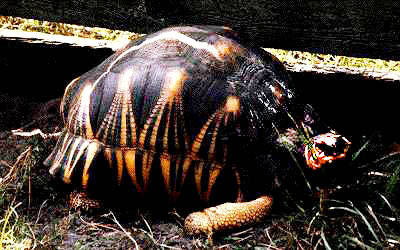 The New York Zoological Society (NYZS) has maintained a herd of Madagascan radiated tortoises (Geochelone radiata) at its Wildlife Survival Center on St. Catherine's Island, Georgia, since 1979. Since the program was initiated, various management schemes have been employed and modified as dictated by observed social and reproductive behaviors (see Behler and Valenzuela, 1983; and Iaderosa, et al., 1990a). Approximately 200 hatchlings have occurred with more than 100 of these taking place during the past three seasons as a result of refinements to our management protocol. Current practices are discussed below. Consistent successful captive propagation of this species has hinged upon the development of an NYZS directed Species Survival Plan program, careful attention to the health and nutritional status of the herd, and a planned annual calendar of social interactions among members of the breeding groups.

The 2,800 m tortoise propagation complex includes a 6.1 x 16.5 m heated wintering barn and a series of 15 x 15 m to 15 x 25 m breeding and management yards surrounded by a 2.4 m high vinyl-clad chain-link fence. St. Catherine's Island is situated at 31° 40' N latitude, and the core range of G. radiata falls between 23° 30' and 25° 30' S on Madagascar. Observed temperature extremes on St. Catherine's Island have ranged from -15° C to 38° C during the past decade. The annual average temperature for nearby Savannah, Georgia, is 18.9° C; average rainfall = 1,262 mm. By comparison, the natural environment of G. radiata is characteristically tropical despite its position below the Tropic of Capricorn. Donque (1972) notes that the low-lying southern coastal areas experience rather uniform temperatures over the entire year. The difference between monthly average temperatures for summer and winter months is less than ten degrees. Temperature and rainfall data for Tulear and Ft. Dauphin, which represent the northwest and southeast ends of the radiated tortoises' range, are 22.8° C and 342 mm, and 23.8° C and 1,530 mm, respectively. Despite differences, seasonality of both St. Catherine's and native haunts of the radiated tortoise is marked by dry and cool seasons, prolonged periods of very warm humid days, and severe summer tropical storms.

Management practices on St. Catherine's attempt to keep environmental parameters within bounds of those the tortoises would experience in nature. The references cited in the introduction describe the management facility in greater detail, and offer additional information on the character of St. Catherine's Island, and the history of the tortoise propagation program there.

Female radiated tortoises are housed together from mid-November until the end of April. Then they are assigned breeding partners according to Species Survival Plan directives. On 1 May, individual females are placed in an outdoor breeding pen with a previously stimulated male. Females typically are very actively courted for 2-3 days post introduction. When courtship and mounting behaviors have stopped, females are removed from breeding pens and placed in a nearby yard with other females. One to two weeks later, they are reintroduced to their assigned breeding partner.

Like females, males are housed together during the cold weather, non-breeding season. In late April assigned breeders are separated from the male herd and placed in one of the pens with one or two beta males. The alpha animal will remain in the pen until mid-November. Aggressive interaction between alpha and beta individuals typically takes place in the pens and serves to stimulate the breeder. Just before introduction of the females on 1 May, beta males are removed to the bachelor pen. When reproduction activity wanes, the females are removed and beta males are reintroduced. The addition of beta individuals again provokes combat activities. The importance of these aggressive interactions between male "rivals" to program success can't be too strongly emphasized. On the other hand, breeding groups maintained together in a single enclosure during the breeding season may not reproduce well because males are preoccupied with agonistic behaviors and miss out on breeding opportunities.

Since 1987, nearly 500 eggs have been laid by five females. Iaderosa, et al, (1990b) report recent data. Egg deposition has occurred in all months of the year but more than 90% of these events took place between 1 September and 30 April. Only 8% of the eggs laid before 15 October (= 30% of total eggs deposited) are fertile, while 41% of eggs laid after that date to the end of the season are fertile. Overall fertility rate has been 32%. Clutch size has ranged from 2-9 eggs (mean = 5.1). A given female may nest as many as seven times per year but 5-6 nestings/producing female/season is considered normal at St. Catherine's. Interclutch interval has ranged from 21 days to 3 years. Occasionally a female has stopped producing eggs for two or more seasons and then commenced laying again normally. Nesting times have clustered around midday. Eggs are excavated from the nest, numbered with a soft lead pencil, weighed and measured, and artificially incubated in air-tight 4 l containers, 1/3 filled with moistened vermiculite (vermiculite/water = 1/1 by weight) in a commercial wooden chick incubator (GQF #25). Incubation length, across all temperatures employed, ranged from 79-273 days (means for 28.9° C, 30.0° C, and 31.1° C = 121, 112, and 114 days, respectively).

Hatchling tortoises are removed from the incubator when they fully emerge from the egg and their yolk sac is less than 1 cm. In most cases this falls about 3 days after pipping. They are weighed and measured, and their umbilicus is rinsed with Betadine solution. They are initially set up in soft-paper-towel-lined aquaria and are given access to water daily. At 50 g the young tortoises are moved to a substrate of Purina Horse Chow 100 and watered twice weekly before feedings. Details about lighting, including UV supplementation temperature regimens, and general care of young have not changed significantly from earlier reports.

During most of the year, graze makes up 80-90% of the tortoise diet. Common southern grasses, a local vervain (Lippia), and legumes are favored foods. Tortoises appear to maintain their own pasture as they regularly return to the same area to graze and thus keep the vegetation (mostly grasses) closely trimmed. New growth is presumed to be higher in protein and lower in fiber than surrounding mature growth. Spanish moss (Tillandsia usneoides), poison ivy (Toxicodendron radicans), live oak (Quercus virginiana), trumpet creeper (Campsis radicans), tree of heaven (Ailanthus altissima), and a wide variety of other native and introduced plant species which grow in the outdoor pens are eaten opportunistically. Twice weekly tortoises are offered a mixture of chopped fruits and vegetables and a small portion of Zu/Preem Primate Canned Diet. During the winter months, while the tortoises are in their shelter building, seasonally available greens are fed daily. In outdoor and indoor facilities the tortoises are fed free choice.

The radiated tortoise is often referred to as the world's most beautiful tortoise. It is a very popular display species in zoological parks and it has prospered from zoo and private breeding programs. Today, more than 400 specimens are registered in the North American studbook for G. radiata. Although the authors found the species to be common in the core of their range in early 1990, the potential for rapid decline remains to be a concern of chelonian authorities. Durrell et al. (1989) summarized the species' status and threats to survival. While considerable strides have been made in the area of captive culture, most aspects of the biology of the species in the wild remain to be studied. Captive programs could profit from knowledge of growth rates and comparative weights of wild radiated tortoises as well as data on their wild diets, parasite burdens, and blood chemistry. Future initiatives should include exploration of these unknowns. Captive programs should continue to develop to satisfy the objectives of the Species Survival Plan for radiated tortoises. While existing founder and potential founder stocks seem more than adequate to preserve a very high degree of heterozygosity in the North American population, additional recruits from among confiscated stocks should be sought to more fully insure the SSP program. As a further hedge, a European studbook program and a Europaische Erhaltungszucht Programme (European version of SSP) should be developed. Likewise, Malagasy authorities, with assistance from these bodies, as well as the IUCN/SSC Tortoise and Freshwater Turtle Specialist Group and its Captive Breeding Specialist Group, should improve the captive management program at their national zoos. Further, a program of repatriation, which should follow a very strict veterinary protocol, should be developed. Ideally such a plan would involve the indigenous peoples who do not now exploit the animal and who could serve as stewards for tortoises returned to the wild. It must also include a strong educational component and be aimed at all elements of the Malagasy society. Unfortunately, the economic conditions in the Malagasy Republic are extremely poor. Consequently there is a favorable climate for exploitation of wildlife resources. Today this is clearly evident in the scores of shipments for the pet market of delicate chameleons, day geckos, and Mantella frogs - some known only from their type localities - which are entering the United States. Legislation that protects the radiated tortoise, as well as local protective customs, are now largely ignored. There is simply no money to enforce the law. Consequently the country lays ripe for plunder and wildlife authorities can give little thought to how current actions will forever change the complexion of Madagascar's wondrous fauna. Our initiatives must come to grips with these problems and plan our future courses carefully.