Last year I wrote two articles about Clark and Lois, the Geochelone sulcata (African spurred tortoises) who came to live with me.

The second article ended with Lois laying a clutch of 20 eggs on October 28 1993. At that point, this whole experience had gone far beyond my wildest expectations. But then, Lois went on to lay a second clutch of 18 eggs during the first week of December and a third clutch of 14 eggs in the first week of January. All together Lois produced 52 eggs.

There was no way of knowing if the eggs were fertile and I had no expectations only hopes. For the first clutch, Mike Connor had predicted a due date of February 14. In the mean time, on January 17, the incubator sat less than a mile from the epicenter of the Northridge earthquake. It didn't fall over and the eggs were not visibly scrambled, but the incubator went without power for a few days and some of the eggs developed hairline cracks and became moldy in the following weeks. February 14, came and went and nothing happened. It was getting later and later--hope was dwindling.

Mike Connor, our advisor in charge of incubation, said we should keep incubating and see what happens. We heard that often eggs from the first clutch don't hatch, or maybe it was the earthquake, or maybe it was the first time for Lois, since she is young, and none of the eggs would hatch. However, on February 26, 1994 an egg from the second clutch pipped. For two days, the tortoise hatchling used his egg tooth to break out of the shell. (The egg tooth is a little protrusion on the end of the nose which the tortoise loses shortly after hatching.) The act of using this tooth on the end of the nose to make a little hole in the shell of the egg is called pipping. On February 28 the first hatchling was completely out of the shell. He or she (it is impossible to know at birth) weighed in at less than 25 grams. What a moment! What an experience!

This little guy stayed in the incubator for two more days so that he could absorb his yolk sack. The yolk sack is the remaining nutrients for the tortoise to use during its climb out of the nest upward to ground level. This sack is made of soft skin that protrudes out from the underside of the newly hatched. Over time the material in the sack is digested, and the space fills in.

This first hatchling was not from the first clutch, but from the second clutch. He hatched in eighty-eight days. For the next two days he didn't do much. But from time to time he would go to the corner of the container and try to climb the wall.

I have a theory about this. The eggs would have been buried thirty inches below the ground in the wild. I think that the hatchling was digging up through imaginary soil to ground level. All of his 11 siblings that followed did the same thing for two or three days after hatching.

The day that the first one hatched a second egg began to pip. Altogether out of the fifty-two eggs, thirteen pipped and twelve hatched. One was still-born. For some reason he did not develop like the others. 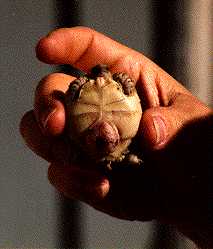 In most turtle and tortoise species, the eggs in the same clutch hatch together or within just a few days of each other. However, it was over four weeks between the pipping of the first egg to the hatching of the last one in the second clutch. Every time we thought that no more eggs from the second clutch would hatch, another egg would pip. Then four days after the last of the second clutch hatched, the third clutch began pipping. This clutch also took almost a month to hatch. As of June 28, 1994, the first hatchling weighs over 100 grams, eats constantly and is doing well. In this short time he more than quadrupled his weight.

We keep the hatchlings in a plastic cement mixing tub on a substrate of potting soil. There is a Vita-light and heat lights above and a heating pad under one side. This is the warm spot. There is also an area in the tub not covered by the light so they can cool down when they need to.

On most days they go outside on the lawn so that they can eat grass and get sun. We have a portable wire fence that we move around the yard. We put a fruit net over the fence to keep any birds out.

Inside the house, in their cement tub, we feed them grass clippings, broccoli, carrots, and greens.

It is interesting to me to hear some of the misconceptions that people have about tortoises. Many people have asked me how the mother cares for the babies. It is hard for some people to believe that the mother digs a nest, lays her eggs, covers the nest, and walks away.

Following the logic of this misconception, I was interested to see how Lois and Clark would react, if at all, to their offspring. They both sniffed the hatchlings as if they were being presented with a new food. I was a little afraid that they were going to take a bite, but they didn't. I think they smelled sulcata scent and were curious. Maybe this is sulcata love!

It is a real pleasure for me to be able to re-live in print this very special experience. Until next time...