The South American twist-necked turtles, Platemys platycephala, are the last remaining turtles in the genus Platemys. The other previous members have been recently reclassified (1985) into the genus Acanthochelys. Like many other South American turtles, Platemys are pleurodires or side-necked turtles. The species name, platycephala, is derived from the Greek roots platys (flat) and kephale (head) and thus literally means flat-headed or flat-shelled turtle. According to Pritchard, the common name twist-necked turtle is apparently from the Guyanan word cashipan.

Their range includes most of the northern half of South America, including: the Orinoco to all but the upper Amazon basin in Venezuela, Columbia, eastern Ecuador, Peru, northern Bolivia, the Guianas and northern Brazil.

As suggested by its scientific name, the twist-necked turtle has a very flat head and carapace. The carapace is oval in shape and has a broad median groove created by two keels running virtually the entire length of the carapace. This double keel is very distinctive. The carapace coloration of my three specimens is an unusual patchwork of light to dark browns with streaks of black. The plastron is uniformly dark brown or black with a yellowish rim that extends to the marginal scutes. The flat head is a dull orange in color, and the neck is covered with tubercles that diminish in size toward the base of the neck. The skin on top of the head is smooth and undivided, without large scales. The remainder of the skin is very dark or black and the legs are covered with large black scales. The legs and feet have the appearance one usually associates with a turtle that spends a good deal of time on land.

Adults reach a maximum length of about 6 inches, with tail size being the best indicator of gender (longer and thicker for males, of course). Mating takes place year-round with the females laying 4-6 eggs, sometimes quite a distance from water.

Pritchard writes that the twist-necked turtle is basically aquatic but is quite often found wandering on land after rain. (If mine waited for rain before they went walking around we'd never see them...). My Platemys p. platycephala spend as much time on land as they do in the water, maybe more. 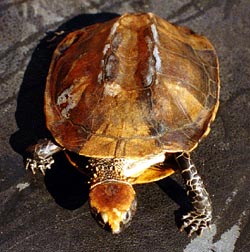 The first specimen my wife and I acquired, "Twisty", appeared so frail in everything he did we thought he would soon die. Two years later he is still creeping around. Twisty has a habit of taking long "naps" out of the water, a behavior that seems to occur year-round regardless of season. He finds or hollows out a small depression with some amount of cover and settles in for up to six weeks. In fact, I don't know how long he would stay "napping" because I invariably search him out, wake him up, warm him up if necessary, feed him and finally let him go on his way. I haven't found any reference to brumation or estivation for this species in any of the texts, so I err on the safe side and assume that they can't or shouldn't brumate. I don't allow them to, even if they try! [If anyone out there has experience with these animals, please contact me via CTTC.] The other two twist-necked turtles don't sleep as deeply or as long as Twisty No. 1.

Pritchard also writes that twist-necked turtles do well in captivity, "but its movements, muscle tone, and whole demeanor may appear so feeble that it often appears to be on the point of expiring." Our animals bear this out. In fact they are so inept at "capturing" food we often feel tempted to hand feed them. When they do manage to "capture" a piece of meat, fish, Purina Trout Chow, Tetra ReptoMin or an insect they use their forelimbs and claws to help tear and guide the food, the way many of their fellow chelonians do. They also employ a strange sideways jerking motion of the head to help ingestion.

Twisty number 2 and Twisty number 3, received as a pair, are less timid that Twisty number 1. In fact, after learning the equation that people equal food, they have become very outgoing – to the point where you have to watch your fingers!

Feeble or not, the twist-necked turtles have made interesting and exotic additions to our turtle collection.

Iverson, J. B. A Revised Checklist with Distribution Maps of the Turtles of the World. John B. Iverson, Richmond, Indiana, 1992.