Testudo horsfieldii is a rugged little tortoise which is included in the genus Testudo, but is currently assigned to its own sub-genus Agrionemys. It is known by at least six common names, including the Russian, the Afghan, the steppe, the central Asian, the four-toed and Horsfield's tortoise, resulting in some confusion when seeking information about it. For the sake of brevity, the Russian/Afghan/steppe/central Asian/four-toed/Horsfield's tortoise will be referred to hereafter as the Russian tortoise.

The range of the Russian tortoise extends from southeastern Russia southward through eastern Iran, northwest Pakistan and Afghanistan. It inhabits dry, barren localities such as rocky deserts and hillsides and sandy or loamy steppes, often at elevations of 5,000 feet (1,500 m) or higher. In these arid regions, the tortoise is frequently found near springs and brooks where grasses and other vegetation are relatively abundant.

The Russian tortoise has a rounded-oval carapace, and is 6-8 inches (15-20 cm) in length, although individuals in excess of 9 inches (23 cm) are occasionally reported. The carapace is distinctly flattened along the vertebral scutes. Coloration of the carapace varies, from a light tan through yellow-green to olive, often with brown or black markings on the larger scutes. The plastron is usually blotched with brown or black on each scute, and in some cases is solid black. The plastral hinge between the abdominal and femoral scutes which occurs in some other Mediterranean tortoises, is absent. The rear marginal scutes, on either side of the tail, are enlarged and often slightly serrated, more so in the male than in the female. The tip of the tail is hard and bony. The tail of the male is significantly larger than that of the female. The skin of the tortoise is usually yellowish-tan. This tortoise is the only Testudo with four claws on each foot, resulting in one of its common names, the four-toed tortoise.

In habitat, the Russian tortoise is primarily a burrow-dweller. It prefers sandy or loamy ground in which to dig its burrow. The burrow is usually 30-78" (80-200 cm) long, ending in a widened chamber in which the tortoise is able to turn around. Spring rains are necessary to soften the soil sufficiently for the tortoise to dig its burrow. As the ground dries out, the soil hardens into a solid crust, making excavations virtually impossible. The Russian tortoise retires to its burrow during the midday heat, as well as at night during its active period. In favored locations, many burrow exist in close proximity. Tortoises are known to visit adjacent burrows, and sometimes several tortoises spend the night in a single burrow.

The Russian tortoise in the wild has a rather short period of peak activity, only three months out of the year. The tortoises emerge from hibernation in early spring (March-May) and immediately begin seeking mates. Their courtship and mating ritual is somewhat unusual. The male approaches and repeatedly circles the female, then stops to face her head-on. He extends his neck and stares directly into her face while rapidly jerking his head up and down. This ritual may include occasional biting and ramming of the female by the male. Copulation is accompanied by a series of high-pitched "clucking" or "squeaking" sounds.

In May or June, the female lays 2-6 eggs, and may lay two (possibly three) additional clutches during the same season. The eggs usually incubate for 80 to 110 days in the wild. Hatchlings emerge in August or September, but sometimes the hatchlings overwinter in the nest and do not emerge until the following spring. In an incubator in captivity, where eggs are kept at a relatively constant temperature of 87° F (30.5° C), an incubation period of 60 to 75 days is typical. Hatchlings normally measure 1.25-1.33 inches (32-34 mm) in length. Growth is slow in this tortoise. While they reach sexual maturity at 10 years, they are considered full-grown at 20 to 30 years of age.

The Russian tortoise remains active until June or July when activity slows. Summer temperatures exceeding 85° F (29° C) can be problematic; so, the tortoise generally emerges from its burrow only at dawn or at dusk in order to forage when temperatures are lower. Their ephemeral food plants are gone by this time as well. Many tortoises spend the summer in estivation, emerging briefly at the end of summer to feed on dried grasses and twigs prior to hibernation.

Winters in their arid highland habitat can be very harsh and cold. The temperature in much of the tortoise's range is well below freezing. Scientists speculate that the body fluids of the Russian tortoise contain a substance like antifreeze to help it survive frigid temperatures. Records indicate that it is able to withstand a body temperature as low as 3.3° F (-4.8° C). However, Pursall in "Mediterranean Tortoises" indicates that body temperatures lower than 36° F (2° C) may cause irreversible physical damage, and possibly death, due to the freezing of fluids in sensitive organs. The depth of its burrow (up to 6.5 feet/2 m) also helps insulate the tortoise from the ravages of winter. 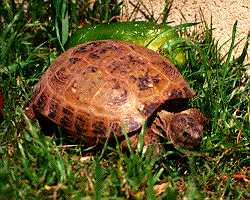 The diet of the Russian tortoise in habitat consists entirely of herbaceous and succulent vegetation, including grasses (green and dried), twigs, flowers, fruits and the flesh leaves and stems of native and cultivated plants. During a rainstorm, the tortoise will drink from the puddles which form. It will usually pass urine at this time, as water is available for replenishment. During the dry season, and in the most arid portions of its range, the tortoise relies on metabolic water in order to supply its needs.

The captive Russian tortoise will feed on various cultivated vegetables and ornamental plants. These include lawn grass, squash, corn, leafy greens, apples (with seeds removed), common backyard "weeds" such as dandelion, and the leaves and flowers of non-poisonous trees and shrubs such as Morus (Mulberry) and Abutilon (Chinese Lantern). The widest possible variety of suitable foods, meaning high in fiber and low in protein, is important for the tortoise's health. Foraging in an area uncontaminated by horticultural chemicals is preferable to a diet consisting solely of "juicy" supermarket produce. Fruit should be offered sparingly, as excess sugar can lead to digestive problems.

Because they are native to such arid regions, shell rot infections can develop in this species if it is kept in a moist climate on a moist substrate. Make certain that the Russian tortoise is able to dry out completely and remain so most of the time.

In habitat, hibernation occurs at surface air and soil temperatures of 32° F (0° C) or less. Inches below the soil surface, the temperature is 59° F (15° C). Wild tortoises use this temperature gradient in order to find their ideal body temperature during hibernation, 39 to 41° F (4-5° C). At these temperatures, the animal is completely inactive, consuming body fat to fuel its much-reduced metabolic process. When its body temperature rises to 46-50° F (8-10° C), the tortoise awakens and digs its way to the surface.

Hibernation in captivity should not be attempted with a newly-acquired tortoise whose health is in question. (This guideline applies to all chelonians, not just the Russian tortoise.) Every effort should be made to diagnose and treat injuries, disease and parasite problems prior to hibernation. Not only is the animal's metabolic rate reduced during hibernation, it immune system function is depressed, disease will progress during hibernation but at a reduced pace. A tortoise going into hibernation with a major disease will invariably deteriorate and may not survive. Temperature control is a factor in disease control. At 39° F (4° C), most disease organisms will cease to grow and multiply. However, at 45° F (7° C) disease organisms can reproduce quickly, causing the disease to progress rapidly.

Avoidance of hibernation should be considered only as an emergency measure employed to deal with a potentially life-threatening condition. It should not be viewed as a matter of course. While there are no known short-term consequences to the lack of hibernation, it has several potentially lethal long-term consequences. Anorexia and kidney disease threaten adult tortoises not allowed to hibernate; hatchlings develop dietary problems. Breeding abilities can also be affected. (For an extended discussion of hibernation issues and techniques, see Pursall's "Mediterranean Tortoises", pages 18-22.)

The Russian tortoise, in some portions of its habitat, has been heavily exploited for food by local peoples as well as for exportation by the pet trade. In other areas, habitat destruction due to warfare, farming, livestock grazing and development have all contributed to the decline of this species. The future of the species in the wild is uncertain at best. Stabilization of the political climate, education of local peoples and reduction of exploitation pressures on tortoise populations would contribute to a more promising future for Testudo horsfieldii.