A Society Dedicated to Turtle and Tortoise Preservation, Conservation and Education 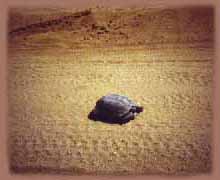 The Northern and Eastern Colorado Desert Coordinated Management Plan (NECO) is a landscape-scale planning effort for most of the California portion of the Sonoran Desert ecosystem. The planning area encompasses over five million acres.  The planning are includes two entire desert tortoise recovery units, and the need to promote desert tortoise conservation and recovery is the major driving force. 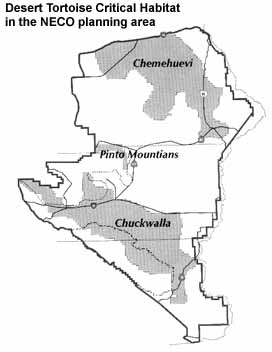 The purpose of the NECO Plan is update the California Desert Conservation Area (CDCA) Plan to make it compatible with desert tortoise conservation and recovery.

Evidence for a significant decline in desert tortoise numbers since 1994 highlights the need for a strong, effective management plan. However, critics of the Plan argue that it is less protective than the management that was already critical habitat, allows unrestricted vehicle travel through washes used by desert tortoises, allows cattle turnout in critical habitat at lower ephemeral production levels, and facilitates the installation of over 100 new water developments throughout the Chuckwalla critical habitat unit all without analyzing the impacts to tortoise recovery.

In January 2005, Ninth Circuit Court Judge Susan Illston issued an injunction ordering the BLM Desert District to restrict off-road vehicle use to designated routes in the NECO planning area. This required the BLM to close the "wash-open" areas to vehicles until the USFWS issues a new Biological Opinion that addresses the recovery as well as the survival of the regions desert tortoises. Read the BLM's 01/04/05 press release for more information and links to the Judge Illston's ruling.  On January 9, 2006 the United States Fish and Wildlife Service (USFWS) issued a new Biological Opinion for the California Desert Conservation Area including the NECO Plan amendments and the closures were cancelled.

On August 14, a coalition of conservation groups filed suit in Federal court to overturn the BLM's West Mojave and NECO Plans and the new FWS Biological Opinion. The groups cite the failure of the plans to "protect private property, conservation lands and endangered wildlife from off-road vehicles across 7.1 million acres of the California Desert Conservation Area in Imperial, Riverside, San Bernardino, Los Angeles, Kern and Inyo counties." The groups seek full implementation of the conservation measures required to preserve and recover the desert tortoise as outlined in the 1994 Desert Tortoise (Mojave Population) Recovery Plan.

Back to: Fort Irwin Expansion Information | Saving The Tortoise